“Your attitude not your aptitude will determine your altitude.” —Zig Ziglar

Did you accidentally hire a Know-It-All? How did it happen? The answer: They had all the right answers and you failed to dig deeper into how they achieved them. They possessed the technical skills you really desired and their references agreed, but gave superficial responses to questions about their ability to work well with others.

The Know-It-Alls do not usually work well with others. They tell you the current results are good enough and spend more time complaining about problems than fixing them. They criticize new and innovative solutions from others, relying on their way of getting things done.

Although Know-It-Alls may have the right skills for the position, they are a poor fit with jobs requiring critical people and project management responsibilities, in other words working with and through other people to achieve intended results on time and within budget. Since many Know-It-Alls are unwilling to be coached and are in denial of their limitations, you must provide them with projects that allow them to work on their own.

Require that they meet with you periodically to assess their progress. Don’t be afraid as their boss to ask good business questions and expect the right answers delivered in a respectful manner. If they show a negative attitude, or disregard or dismiss your concerns, provide them with a “come down to reality” conversation: Remind them it doesn’t matter where you work or who you work for, you must listen to others and realize that 99 percent of the world’s information resides in others’ heads.

Jeannette Seibly delivers straight talk with immediate results to business owners and executives of $1MM to $30MM enterprises, achieving dynamic results. Along the way, she helped create three millionaires. You may contact her at JLSeibly@SeibCo.com to discuss your coaching challenges.

A company wanted to terminate an employee who was not achieving results. She had a multitude of excuses, blamed her boss for his lack of support and refused to be held accountable for her employees’ actions. When the boss had had enough, the HR Director stressed, “Her employees won’t be happy. She is well liked.” The reality? Many of her employees were happy to see her go since they already realized she was the bottleneck for not getting things done, poor decisions being made and low morale.

Laissez-faire leadership has been creating a devastating impact on companies worldwide, according to Herman Trend Alert, August 22, 2012. Many business professionals are not holding themselves accountable for their results or their employees’.  They blame increasingly complex business environments, workloads and lack of financial and other resources. To complicate these concerns, many leaders have become more concerned about being liked, holding onto their power of control, not rocking the boat or micromanaging to the point of exhaustion.

Delegation. Work-life balance is something we strive to achieve. We blame our employers for our failure to achieve this ideal. The truism is there are time periods when personal concerns (e.g., health, family, and home) will take precedence in your life. There are other times when your professional considerations require stronger attention. Be proactive. Learn to manage these inevitable transitions by requesting help (at home and work).  Stop waiting for the perfect time to cross train. Do it now before the need arises. Learn to trust others to make decisions appropriate for their experience and abilities to alleviate bottlenecks before they start.

Build on strengths. When you are in a job that aligns with your strengths, work life becomes easier to manage. The same is true for your employees. Learn how to hire people who fit their work, and how to manage them accordingly. Hold your employees accountable for results, sales quotas and other objectively set metrics. If employees are unable to meet these measures, it may be time to review their fit with the job. A good person in the wrong job can inhibit her/his own ability to accomplish normal tasks with ease, and issues seem to get muddled and, never resolved. Take the time and spend the money to hire the right people. Learn how to create a work flow that recognizes a person’s strengths.

Handle the Elephants. Most people love to put off until tomorrow what isn’t urgent today. Unfortunately, this growing stockpile doesn’t deplete naturally and unaddressed issues actually grow exponentially.  Hold yourself accountable by enlisting the help of your business advisor as an objective sounding board. Determine effective resolutions for both potential and long-term elephants. You may be pleased to find some can simply be crossed off your list! 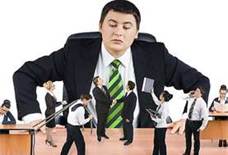 I recently received an article in my Inbox from a business associate’s employee. It was about bosses being difficult (a nicer title than the actual one sent to me!). I, myself, have worked for bosses who truly understood the technical aspects of the job and industry, but did not know how to manage. I learned a lot from them. I’ve also worked for a couple who received their job title for reasons unknown. And I learned how to work with them to achieve needed results, too. In any company, there will be bosses who earn their title, while others happen to be in the right place at the wrong time. These bad bosses often exhibit poor communication styles, lack of organization or project skills and show favoritism.

The goal? It’s your job to learn how to work well with them in order to receive your paychecks, acquire job expertise, and support your own career aspirations. A career lesson to be learned. Otherwise, there’s an excellent chance your next boss will be the same with a different name!

A true story: a client was disparaging his boss, and his actions. He believed his co-workers felt the same way. One example was how this difficult boss distributed quarterly bonuses after completion of a major project. As his coach, I recommended he talk with the boss and clear up any misunderstandings. He did so very reluctantly and was happily amazed by the outcome! Not only did his boss stop sharpening the pencil, my client became known for his ability to work well with a difficult person. Other employees came to him for advice when dealing with this boss, and others. The President of the company acknowledged his executive growth and promised new opportunities in the future.

Hire your boss a coach. Obviously, this needs to be accomplished very diplomatically. Most bad bosses do not know another way to behave. They hate people challenges due to a lack of logic. They may become emotionally inept at handling these issues because of their own need to be liked. Maybe your boss takes the job more seriously, believes you and your co-workers should too, and is simply more demanding than others as a result. A good coach will help the boss see him- or herself objectively, develop more effective ways of interacting with others and develop people or project management skills to get results.

Eye of the Beholder. While you can always find others who will agree with your assessment of how bad the boss is, look for others who have a different perspective about the things your boss is doing well. Listen to them. Maybe s/he is fair in bonus distribution and allocating OT. Perhaps s/he offers great ideas and ensures you receive the credit for implementation. When dealing with more controversial concerns, handle the roadblocks provided by your boss in an assertive manner to resolve customer or project difficulties. Remember, your boss (and others) may find productive disagreements helpful and getting to the source of excuses beneficial in order to achieve required results consistently. Needing to be liked or overly nice does not equate with being effective.

It’s a process, not an event. It is natural for employees to expect an immediate difference and readily noticeable changes when a boss is advised of deficiencies. The reality? Bad habits take time to correct, regardless. For example, how long does it take someone to quit smoking cigarettes? It takes most people more than a few months, before it is deemed successful. So keep acknowledging any positive change. Hire yourself a coach to help you deal with your own life goals and interpersonal fears. You’ll be amazed by the difference it makes when you learn to be patient with yourself and are effective at achieving your own goals. Your new awareness makes it easier for others to get along with you!

Jeannette Seibly is a Business Advisor and has successfully coached 1000’s of business owners and executives to be successful leaders while growing their businesses. Three of them became millionaires!

Too often we believe that we know it all. This is compounded by easy access to the internet, social media sites, on-line libraries, and other material resources. We fail to realize that our effectiveness as leaders relies upon our ability to converse, listen and learn from other human beings! When we allow our egos to get in the way, we limit issue resolutions, fail to recognize our current thinking has created issues, or we assume we’ll get to the answer ourselves if we simply think longer. A mental monologue does not provide new information or perspectives! It simply regurgitates what’s already in one’s brain.

Learn how to ask questions.  If you sound like an interrogator, you will leave others feeling defensive and you’ll usually get flippant responses. If you don’t listen and keep asking the same questions, people will stop sharing possible solutions. Remember, we never learn everything in one conversation! Learning is a lifelong process. That’s why there are other people in the world! Lighten up and learn to have real conversations.

Set aside ego.  Admit you don’t know the answer. Learn to brainstorm ideas, particularly out-of-the-box concepts. Interestingly, many times it’s the idea that appears to be off-the-wall that provides the best solution. Also, if you have difficulty taking risks or making mistakes, you’ll never learn how to improve yourself, a project or the financial well-being of your company. You learn the most from your best teacher – experience. However, piling up too many failed experiences will not bode well for your psyche.  Healthy leaders build on strengths, not weaknesses. Hire a business mentor to guide you through an operational, people or financial challenge. Mentors enable you to take calculated risks as you design and implement a strategic plan.

Listen for the gold mine. When you are truly listening, you will find a wealth of insight that you had never considered. Don’t grab the first couple of ideas and retreat, believing you now have the answers! Ask questions of others to see how you can segue these ideas into focused action plans with attainable results! Sometimes your perception of who may be the most unlikely people to talk with will surprise you; they may have the solutions that work or contacts to answer the questions!