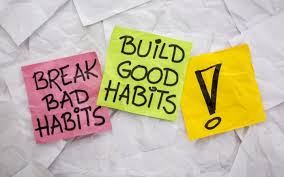 What were once good ideas, attitudes or behaviors can become bad habits over time.

Good habits turning into bad ones are insidious processes. They creep up on you until bam, you say or do something that offends others. Bad habits impede your effectiveness and success. They negatively impact your relationships with others. Plus, you’ll fail to produce results and build the teamwork required for businesses to grow.

1. Poor Listening Skills. This #1 bad habit is the cause of many skilled professionals facing career derailment.

A sales professional normally checked his emails during meetings and insisted he could still listen while multitasking. He didn’t understand that human brains are wired for a single activity. Even though many bought into his excuses, he missed sales cues and opportunities to close. When a potential client refused to buy into his excuses, the sales rep not only lost a big sale, he was fired. He even failed to listen to his boss telling him, “You gotta learn to listen!”

Listen as though your career depends on it…because it does!

2. Lack of Awareness. One executive constantly found fault with how others did their work. He thought he could do it better and faster. The truth was, he didn’t have the skills to do their jobs and lacked awareness his comments were offensive.

When someone fails to achieve the intended results, it’s time to be aware of how you impact others in getting their jobs done.

Awareness determines your results and successes.

3. Know-It-All Attitude. A new boss was a micromanager, a common trait of inexperienced managers. She wanted everything done exactly as she thought it should be done to avoid looking bad. She blamed her employees (and others) for inevitable mistakes. She thought she knew everything.

After she learned how to control her anxieties about making mistakes, looking bad, and not being respected, she shifted her focus off herself.  She learned to be open to others’ ideas and successfully incorporate them into projects. The results were fewer mistakes being made and team members felt valued.

Building true confidence and ability to hear others is an inside job.

Remember, bad habits will come out in unexpected ways and get in the way of our success. Work with an executive coach to unravel the murky situations and complex relationships before attempting to resolve these challenges on your own.

Jeannette Seibly is an award-winning champion for people and results. For the past 26 years, she has guided bosses and teams to excel in breaking bad habits. Contact Jeannette today for straight talk with dynamic results.

NEW! Want to become a better boss? Find out how: https://seibco.com/15-ways-better-boss/

It can be challenging to see a situation from another’s point of view when you are emotionally attached to being right. Ask questions. Listen and learn.

“We are what we repeatedly do. Excellence, then, is not an act but a habit.” — Aristotle