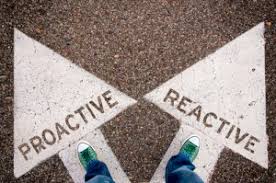 Everywhere, exhausted bosses hate having to put out “fires.” The sad truth is, many of these “hot issues” are preventable by being proactive.

I remember reminiscing with a former coaching client last year. We laughed at the many stories we had addressed when he was the director of a technology company.

One of the most powerful stories was, he never seemed to worry about anything. His normal response, “I understand that maybe I should be worried … and I am concerned … but, I don’t see how running around will change anything.”

His new version: “If there is a fire in the building, I need to get involved instead of sitting and roasting marshmallows.”

He was right. Over-reacting is just as bad as not-reacting. It’s why our coaching calls focused on becoming a proactive boss that prevented “fires” from occurring.

Get Into Action Now

Stop Waiting for “The Perfect Time.” It’s a myth! Waiting until the situation or issue is “really hot” makes it more difficult to “put out the fire.” Attempting to drench it with a fire hose only has team members drown in chaos. In the chaos, the real core issue is camouflaged by smoke and mirrors. Listen up! Be open to hearing what you don’t want to hear. It’s the only way to be proactive and put the fire out now.

Two co-team facilitators sniped at each other during team meetings. Many team members stopped attending and blamed each other for the conflicts. When the boss heard about it, she simply stated, “People will be people.” It wasn’t until her top employee left that she decided she better listen! He blamed her for his need to leave. Perplexed, the boss asked why he felt that way. He replied, “All you had to do was care enough to be proactive, instead of waiting for the inevitable fires.”

Uncover “Why” There Are Upsets and Frustrations. Have you been hearing gossip and sparks of dissension?  If there are complaints, it’s past time to get involved! First, address what you have been afraid of hearing. Then, listen and ask questions to get to the heart of the matter. Don’t fall victim to the popular blame-game often used by others to deflect their responsibility. Straight talk and openness are required to create solutions. Note: If the fire is serious enough, before plunging in and making matters worse, dowse it by hiring an executive coach.

Badgering or Micromanaging Will Not Fix the Issue. Many times bosses feel helpless to resolve a current fire or a spark about ready to ignite. They default to nitpicking, playing the blame game, or steamrolling to get the results. These traits do not build high-performing teams, nor resolve the heart of the issue! When asking good business questions listen to your team members. Remember, you can fix the process, but, you cannot fix personalities.

Everyone Needs Training. Most fires are preventable with proactive actions. It starts with training everyone in how to conduct effective meetings, in-person and virtually. Remember, proactive training is ongoing. Focus on listening, conflict resolution, building trust, and holding each person accountable for the results.

Acknowledgement Work Wonders. It’s the boss’s job to let each and every team member know they are valued for their efforts. This can prevent fire-fighting. Why? When team members feel they matter, they are more likely to proactively prevent sparks from turning into out-of-control fires.

Being proactive as a boss is one of the most difficult challenges you will face. It’s difficult to know when to step in and when to simply advise. Jeannette Seibly has been an award-winning champion for people for the past 26 years. She has guided bosses and teams to excel. Contact Jeannette today for straight talk with dynamic results.

Hope is not a strategy to get your team unstuck! Learn 10 ways to do it now.

It can be challenging to see a situation from another’s point of view when you are emotionally attached to being right. Ask questions. Listen and learn.

“We are what we repeatedly do. Excellence, then, is not an act but a habit.” — Aristotle