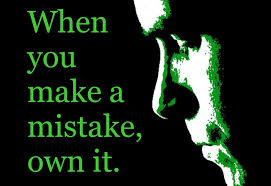 The answer is simple. If you don’t own your mistakes and hope no one notices, you will sabotage your career now and in the future.

A new fast-track manager wanted to make a positive impression with his team. So, when he made a major mistake on a financial projection for a new product, he didn’t say anything to anyone. Since no one said anything that day or in the days that followed, he believed the mistake must not have been that bad. He breathed a sigh of relief at the end of his workweek on his drive home.

However, his teammates did notice, attempted to fix the problem, and told his boss. Then, the product failed. What’s worse, the boss waited six months before bringing up the mistake and focused on it during the manager’s performance review. The boss reviewed the mistake, impact, and costs. But, by then, it was too late to fix the mistake and trust had been already broken. The new fast-track manager’s career was sidelined because he didn’t own his mistake.

The 5 Critical Ways to Handle and Own Your Mistakes

Jeannette Seibly is an award-winning champion for people and results. For the past 27 years, she has guided bosses and teams to excel. Do you need to improve how you communicate with your team and produce unprecedented results?  Contact Jeannette today for straight talk with dynamic results.